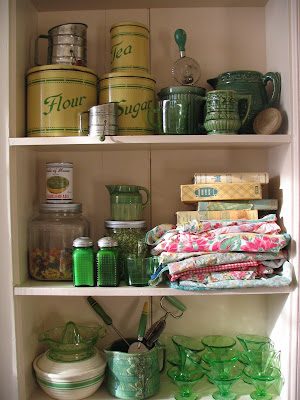 During Medieval England terms like “larder” (from meat stored in crocks of rendered lard) and “buttery” (storerooms for large barrels or “butts” of beer and ale and other provisions) and “pantry” (derived from the Latin word for bread, panis) came into use to describe these domestic spaces.

1800s (especially 1850-1900) ~ The era of the “butler’s pantry” begins in England and America: a small pantry between kitchen and dining room where china and silver were stored and meals were plated and served (often by a butler or household staff). First essentials of great estate homes, later they could also be found in moderate middle class homes.

1857 ~ Mrs. Elizabeth Ellet writes in The Practical Housekeeper, “Let there be a place for every article, and when not in use let every article be in its place.”

1869 ~ Catharine Beecher and Harriet Beecher Stowe write their seminal The American Woman’s Home promoting the idea of bringing the pantry into the kitchen by adding more kitchen cupboards and shelves. However, the idea doesn’t take hold for almost another century.

Circa 1850-1886 ~ The reclusive Emily Dickinson often writes poems from her pantry in Amherst, MA as her cousin Louise Norcross later described: “I know (she) wrote most emphatic things in the pantry, so cool, so quiet, while she skimmed the milk; because I sat on the footstool behind the door, in delight, as she read them to me.”

1876 ~ Mark Twain’s The Adventures of Tom Sawyer begins by Tom paying penance for his pantry raid on Aunt Polly’s jam by having to whitewash her fence. [pantry raids were often written about or illustrated in children’s literature.]

1885 ~ Almanzo Wilder builds a remarkable farmhouse pantry in their new home in DeSmet, South Dakota for his bride Laura Ingalls which she sees for the first time on their wedding day (and later describes in great detail in the last chapter of her book, These Happy Golden Years).

Circa 1900 ~ The invention of the Hoosier cabinet in New Castle, Indiana was often billed as a pantry and kitchen in one and went on to become an enduring icon in American kitchens.

World Wars ~ The war effort at home during both World Wars promotes canning from the home kitchen as a patriotic duty.

1920s - 30s ~ The increasingly popular “breakfast nook” begins to displace pantries in kitchen design as the pantry starts to merge with the kitchen by means of extended cabinetry and cupboards.

1928 ~ Marjorie Kinnan Rawlings writes in Cross Creek Cookery about her Florida farmhouse: “I always keep on hand in the pantry cans of sliced or halves of peaches, and a good shortcake may be made on a moment’s notice.”

1950s ~ With an increase in the prepared foods for the housewife following World War II, and with better refrigeration and freezers, the pantry becomes all but obsolete in American homes except in farmhouse kitchens.

1990s ~ A pantry revival in American homes is driven by a preference for separate food or dish storage and an emergent nostalgic appreciation of this valuable kitchen space.

2005 ~ In a survey by the National Association of Home Builders, walk-in pantries are the most requested kitchen feature in American homes.

I was raised in the South in a home that was built either during the Civil War or just after. It had a lovely pantry. Without the shelves and nooks it was about 5 feet by 12 feet, with a full wooden door as entry way from the kitchen. The pantry room was large enough for us to put an old fashioned wringer-washer tub in in it when not in use. To the right, there were shelves for canned (I mean canned in JARS) goods, linens and whatnot. My mother stowed her sewing goods in there.

To the left was a vertical nook for the ironing board and then a long space that reached to the outer wall of the house. I guess that flour sacks used to have been stored there. I loved that pantry so much that I still dream about being there! It was a cozy, comforting place that spoke of abundance and hominess.

When I was growing up my maternal grandmother lived in marvelous old multi-story houses with many rooms having several doors leading to halls and other rooms. Strangely, I don't recall either of her houses having a pantry or any remnant that could have been one, though from the parts of town in which she lived I'm sure her homes were built in the 1920s or 1930s. My paternal grandparents lived in a much smaller, more modest house built in the 1940s. It had a pantry, a bay window with a built in chest, a hall and a master bedroom chock full of closets and cupboards and a very large screened in porch. Even more strangely, Grandmothers old houses still stand, whilst Grandma & Grandpa's house has been demolished for re-development yet to occur a decade later. I'm lucky enough to live now in a 1920-built house with a pantry in the kitchen. It's just a closet full of shelves and with a small north facing window, but my food budget benefits enormously from keeping it carefully stocked.

I grew up in a house with a butlers pantry. The special small door lifted up to send the plated food or serving dishes through to the dining room. My parents bought the house in 1957 and within the first few years the pantry was changed completely. It became a shower room and though practical certainly lacked the character that the pantry added to that turn of the century home.

My grandmother's home was in Greensboro, NC. I am 83 and she had 9 boys and two girls. My mom and I lived there during the WWII and I do not remember the great depression.
But before and during the WWII, they all did remember the depression. So, they did have a large pantry and it was full of presserves etc. I remember that they called it a "poor pantry". I think they were ever in fear of running out of food, so they stored a great amount of it.. And she had a real slanted cellar door into a giant dug out cellar under the house to store potatoes etc. The iceman came in the back door to put ice in the "icebox" and the milkman put milk on the front porch during WWII. My dad and most of her boys were away some of that time, fighting "Japs" or the "Hun". Her garden pre-dated the "victory garden", and it kept the pantry full and her chickens and their eggs were her "cash crop" so she could buy what we did not produce. Well that and the fact that she had her allotment from the unmarried boys that were in the war.

Halo,I'm Helena Julio from Ecuador,I want to talk good about Le_Meridian Funding Service on this topic.Le_Meridian Funding Service gives me financial support when all bank in my city turned down my request to grant me a loan of 500,000.00 USD, I tried all i could to get a loan from my banks here in Ecuador but they all turned me down because my credit was low but with god grace I came to know about Le_Meridian so I decided to give a try to apply for the loan. with God willing they grant me  loan of 500,000.00 USD the loan request that my banks here in Ecuador has turned me down for, it was really awesome doing business with them and my business is going well now. Here is Le_Meridian Funding Investment Email/WhatsApp Contact if you wish to apply loan from them.Email:lfdsloans@lemeridianfds.com / lfdsloans@outlook.comWhatsApp Contact:+1-989-394-3740.

Get THE PANTRY today for yourself, your friends! 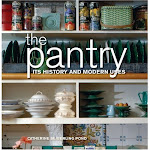 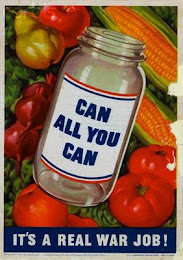 Farmwife at Midlife is Here!

It's official! As of January 1, 2011, I have a new blog called Farmwife at Midlife and I hope you will follow me there. It will continue to chronicle our lives here on our Kentucky ridge farm but in a more inclusive, and specific, way.
I still love pantries, of course, and will occasionally post here on pantry-specific items or to update as to any information about my book, The Pantry-Its History and Modern Uses. As you know, this blog was never exclusively about pantries but started out that way. Thank you for visiting my blog and please stop over at the farm!
Best wishes, Catherine

Recent Posts. . . in the pantry

NOTE: Photography on this blog © Catherine Seiberling Pond unless otherwise credited. Please do not use my photos without permission. Thank you.

Search "In the Pantry" Blog (and related links):

Please visit my website and other blogs (including book-related):

See my interview on HouseSmarts

People in the Pantry